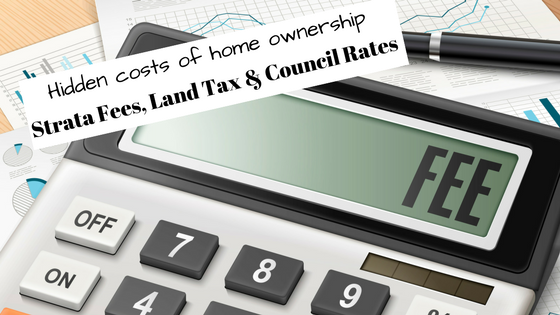 The Australian dream of homeownership has for decades been seen as the foundation stone for financial prosperity. There are, however, many costs of owning a home that you just don’t see when you’re renting. As property prices stabilise and interest rates remain relatively low, there looks to be renewed interest from first home buyers entering the property market. The move to homeownership certainly makes more financial sense than renting and paying off somebody else’s mortgage, right?

Buying your own place can be a path to a solid financial future because the mortgage payments you make every month lead to an increased home equity and the rising values of home, which will eventually add to your asset. However, potential buyers who aren’t prepared for the true cost of owning a property may be shocked by the bite homeownership can take out of their wallet in addition to their mortgage payments.

So, where does your money go?

What is a strata fee? For most of you, strata fee is either on your apartment or on your townhouse. In fact, they’re both stratified properties. Strata fees are broken down into four major areas. The first is being the annual budget. This is the money that goes into day to day, year in and year out maintenance of the property. The second is the contingency fund. It is the fund that you put into those projects that are unpredictable and could pop up anytime in the future. Those major projects can include putting a new roof on or re-doing some of the roads. It is important to know that contingency fund isn’t designed to take care of all those incidentals costs. It’s meant to help minimise those big costs. The third area is the management of the strata. If you are in a townhouse or in an apartment complex, you might have an outside company that does the managing of the complex. For some of you who are in a self-managed complex, you won’t have this fee.

Lastly, the fourth area and the one that would probably surprise homebuyers the most is that your home insurance is in your strata fee. That’s the insurance on the actual structure and the common properties. The insurance that you’ll need to get on your apartment or townhouse would be the content insurance which pertains to your personal property. But, you also have to keep in mind that the insurance that’s on the strata unit is designed to replace the original structure. If you take out a kitchen that was originally worth $15,000 and you replace it with a $25,000 kitchen, it’s important that you get in contact with your insurance company and insure the $10,000 difference.

Another thing about strata fees, there’s a lot of complexes out there that have recreational facilities and those are the things that really increase the costs of the strata payment. So if you’re the type of person who regularly uses the gym, swimming pool, and the hot tub, then it makes it really inexpensive and convenient to have those amenities accessible to you. But if you’re the type of person who’s not going to use the gym, never uses the hot tub and swimming pool, be mindful of those costs as they really do drive up the strata fee.

If you’re buying a new strata property or an almost new strata property, it’s essential to know that sometimes those strata fees are usually low for the first number of years. A good thing to do is to contact your realtor, get an average of the strata fees and know the surrounding area for properties that are 10 to 20 years old to give you an indication of where your strata payments are going to go over the next few years.

It’s one of the hidden costs of homeownership that you want to avoid. In every state around Australia, each state government has its own Office of Revenue that calculates a special tax you have to pay should you amass a property wealth of more than a certain figure. But, here’s the thing- it’s not a property wealth on the dwelling that sits on top of the property or a combination of the dwelling plus the land, it’s just the assessment of the land value itself. As you can imagine, it depends on the property type you have, the state you are investing in and the location within that state. This kind of variables would affect the score of the land tax rate that you have to pay. Moreover, it’s assessed annually, which means that you have to pay it every single year.

Local government authorities levy annual taxes, which are called council rates. The basis on which these charges can be calculated varies from state to state but is commonly based in some way on the value of the property. Even within states, individual local government authorities can often choose the specific basis of rates. There are instances wherein it may be on the rental value of the property, as in Western Australia or on the unimproved land value, as in New South Wales. These chargeable valuations are usually determined by a statutory authority and are subject to periodic revision.