Why Your First Home Often Isn’t Your Forever Home 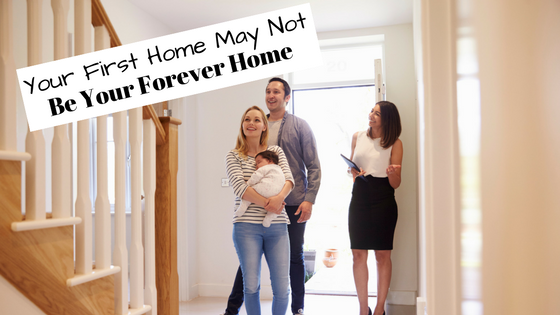 When you fall in love with a home, you may envision yourself living there forever. First time buyers are particularly vulnerable to this phenomenon. Lives change, however, and believe it or not, take a minute to think about who you were or where you were just 5 to 10 years ago. You may have switched jobs or even professions. Your family may have grown and your neighbourhood may no longer remind you of the place you moved into a decade ago.

This isn’t to say you shouldn’t think about the future when you consider buying your first home. It’s just a suggestion to approach the process knowing that it can be your starter home and it’s one step closer to buying your forever home.

Young couples, not that long ago, headed to the suburbs either to buy or build their very first home. But today, Australians are marrying later, buying their first home later, and rarely is that property purchase the last.

The average first home is now, by almost any measure, expensive. According to Australian Bureau of Statistics data, the average first home owner, at the beginning of 1992, financed the purchase of their first home with a loan of just $67,700, and that figure had risen to $355,500 by October 2015. It’s actually considered an average since the increase in Melbourne and Sydney is far higher. According to ABS data, average weekly earnings for an adult in full-time employment, over the same period, lifted from $621 to $1,556.30. Bigger loans and stagnant incomes only tell part of the story.

The expectations of the buyers have changed dramatically over the past five years. Many would have moved out to the suburbs at an earlier time in their life, but they’re now doing it in stages. They want to stay close to the city, transport, and other amenities. People will buy an apartment in their favoured area near the city because they’re often still in their price range when a house simply isn’t. They’ll start their family there. Then, eventually move on only once the kids get older.

A rapidly rising property market and changing expectations may be making it harder for you to get into your first home. However, you also have the perks when it comes to buying your second home. Many are leveraging off the equity of their first purchase to assist in buying their next. It allows them to either sell their first home or keep it as an investment.

In other words, aside from using a first home as a vehicle for a happy family life, people are gradually seeing it as an investment. It’s important that buyers understand that their first home doesn’t have to be their forever home. Instead, they should consider their first purchase as a way to get into the property market which they can leverage off to make a second purchase. It’s more of a stepping stone.

Rising house prices and changing expectations are making it increasingly impossible to have it all too early in your property journey. So, you’re definitely buying later, buying smaller and more often than not, buying again. It’s very unlikely that your first home will be your forever home.