How Much Do You Need To Save For A Home Deposit In Australia?

Nowadays, banks and nonbank financial institutions have stricter requirements with regards to their Home Deposit Loans. Most of these lenders have reduced the loan to valuation ratio that they are willing to offer to their borrowers.

The Variable Mortgage interest rates have gone down to 2.89%, this is in line with the monetary policy adjustments of the RBA (Reserve Bank of Australia).

Canstar, a research and expert ratings agency in Australia, have presented a snapshot of the mortgage rate environment in compliance with the RBA’s consecutive adjustments with their monetary policy which predicted that cash rate fall by a total of 50 basis point to a new record low of 1%.

RBA’s main objective why they need to have a back to back cut rates is to encourage the labour market, stating that lower rates could help support the needed growth in employment. The mortgage market promptly responded to the cut rates as they have already implemented it to their home loan clients.

NAB Last Among The Big Four To Cut Rates

NAB (National Australia Bank), one of the 4 major banks in Australia, has updated its mortgage serviceability assessment policy.

Their amendment is in response to APRA’s (Australian Prudential Regulation Authority) changes to its home lending guidance earlier this month which allowed banks greater flexibility to set their testing rates after scrapping a minimum of 7% interest for loan applications by up to 2.5%.

With APRA’s easing credit conditions, it is intended to boost the borrowing capacity of many new customers, the RBA (Reserve Bank of Australia) has stated that the conditions in the housing market were gradually stabilizing following a drawn-out property downturn, but noted fall in prices had slowed in some markets and auction clearance rates increased.

NAB has lowered to a minimum of 5.5%, in line with its major peers. its interest rate floor to 5.5% and increased its interest rate buffer to 2.5% which covers all new home loan applications starting August 5.

It is the latest among the 4 major banks to amend it serviceability policy and joining all other competitors, the ANZ (Australia and New Zealand Banking Group), Westpac, and CBA (Commonwealth Bank), Macquarie, MyState Bank, Bendigo and Adelaide Bank, Suncorp, the Bank of Sydney and Auswide Bank.

The bank’s announcement has seen it undercut CBA and Westpac as they are the 2 major competitors which dropped their rates to only 5.7%.

ESA is an account that all banks should have for the purpose of making payments with each other within the Australian payments system. These Exchange Settlement Accounts are owned by the Reserve Bank of Australia, there must be positive balances and are used to settle debts that have accumulated in the clearing process.

They are also used as a precautionary measure, as the RBA has committed to cover any gaps in payments among the members, this is to ensure the Australian payments system functions all the time.

Why You Should Care About Your Superannuation?

Superannuation as it is popularly known as “Super”, it is an amount of money that is set aside while you are working just in time when your retirement comes. Your money is being deposited as a fund, where it is invested in your name by a trustee, so as to help you earn returns and increase your savings.

A research conducted by CBA (Commonwealth Bank of Australia) has shown that 91% of First Home Buyers are confident that their dream of owning their own home is already within reach.

The percentage came from a total sample size of 1,012 home loan clients, including non-CBA mortgagors. The result from CBA, which gives an outstanding 91% only means that home ownership is now feasible. The research result has a significant difference in comparison to the research result in the previous year, in which 1 out of 5 Australians or 20% have said that home ownership is not feasible.

SMEs (Small-to-Medium Enterprises) struggles to get a loan application from traditional bank lenders over the years. It is the reason why they go instead to Non-Bank Lenders. A study has shown that SMEs turn their backs away from banks and explore their options for loans to Non-Bank Lenders and their numbers are more likely to increase in the future.

The critical constraint on borrowing limits that were implemented in late 2014 has been removed by APRA (Australian Prudential Regulation Authority). It is another move that may encourage the idleness of the property market.

To make it more specific, APRA has removed its quantitative guidance on the level of the serviceability floor rate at 7%, which ADIs (Authorized Deposit-taking Institutions) or banks use to assess home loan applications.

This highest level recorded can be associated with the increased household costs, stable wage growth and higher mortgages which is an integral part of the major Australian cities’ high-priced housing market.

On the other hand, the above statement disregards the complications of the debt problem in Australia. It overlooks the technological changes to payment methods and spending habits which may be the reason for the rapid growth in consumer debt. 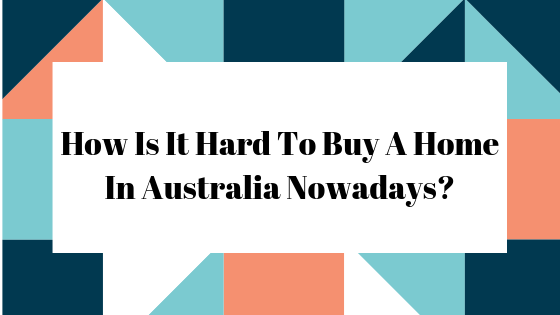 How Is It Hard To Buy A Home In Australia Nowadays?

Purchasing a Home In Australia is often the single largest investment a person or family will make. However, the younger generations are giving up hope of ever buying their own home.

Buying A Home In Australia Reshapen By Younger Generations

A report from the AIHW (Australian Institute of Health and Welfare) pointed out that the younger generations may be restricting themselves out of their market needs on their personal choices. Research shows these younger generations of Australians are living with their parents for longer because of the high cost of living, and they are getting crippled by debt. This is what Australia is experiencing right now, the change of generations when it comes to homeownership, with younger households being influenced by factors which limit their ability to become homeowners such as economic challenges, lifestyle choices, and work-home preferences.